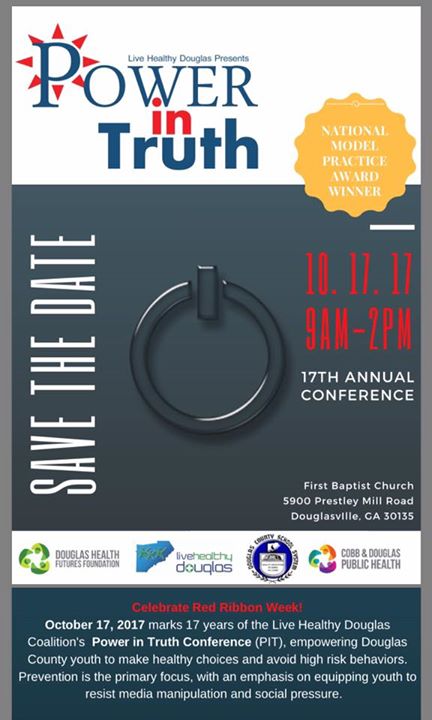 The Live Healthy Douglas Coalition, in partnership with Cobb & Douglas Public Health (CDPH), Douglas County School System and other community partners, is pleased to host the 17th annual Power in Truth (PIT) conference on Tuesday, October 17, 2017 for the prevention of youth substance abuse. The conference is held in Douglasville each year, and is designed to empower Douglas County middle and high school students to make the choice to resist underage drinking, tobacco use, and all other substance abuse.

“The goal of the PIT conference is to help Douglas County teens learn about the dangers and risks associated with substance abuse, and to give them the knowledge they need to resist media manipulation and peer pressure,” said Aura Morgan, Chronic Disease and Injury Prevention Director with CDPH. “Working with local and community partners to hold this event helps teens realize their choices have a wider impact than just themselves, and empowers them to make better decisions.”

Dr. Joe Johnson of the Joe Johnson Group will be this year’s Power In Truth Keynote Speaker. Dr. Johnson grew up in the inner city of Milwaukee and nearly fell victim to gang violence and self-destruction. Sports was his key outlet. After becoming a high school standout football and basketball player, his education finally caught up with him when Division 1 colleges passed on him when finding out his grade point average and his score of 13 on the ACT (standardized test). Dr. Johnson is passionate about helping others Think, Act, and Live Purposefully. Having struggled with the start of his own life, he seeks to empower others to learn, grow, and prepare for their futures.

The PIT conference will be held at the First Baptist Church of Douglasville from 9:00 a.m. to 2:00 p.m. Students are selected by the school system to attend the free event and it is considered an approved field trip.

For more information about the PIT Conference, contact Chronic Disease and Injury Prevention Children and Youth Section Manager Viva Price at (770) 514-3107, or Viva.Price@dph.ga.gov.