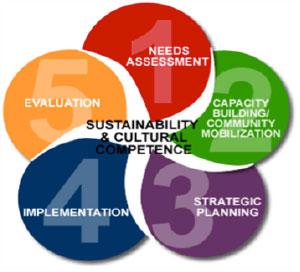 Alcohol is the most widely used substance among youth 9-20 years. The Live Healthy Douglas Coalitions’ Alcohol Initiative; Douglas Alcohol Abuse Prevention Initiative (DAAPI) is part of Georgia Strategic Prevention System (GSPS). GSPS is a state grant that is a multilevel network-based system aimed to prevent substance use and abuse and promote healthy choices and lifestyles among Georgians by implementing sustainable evidence-based strategies (programs, policies, and practices). The GASPS has 3 main goals:

DAAPI works in conjunction with these three goals in order to help the state as well as Douglas County lower the number of youth who may be suffering with alcohol addiction or abuse by way of early onset of use, binge drinking, and easy access. Prevention is the key! Live Healthy Douglas Coalitions’ DAAPI program is the prevention link to introducing policies, procedures and programs that are the result of Douglas County’s community assessment.

The Live Healthy Douglas Coalition and the Douglas Alcohol Prevention Program recently sponsored a PSA (Public Service Announcement) contest focused on underage drinking prevention.  Douglas County Middle and High School students were challenged to produce a 90 second video that promoted the “Be the Wall” awareness campaign which asks adults and youth to be a firm, clear, consistent, wall when it comes to youth and underage drinking.

Live Healthy Douglas (LHD) has a goal to reduce the onset of underage and youth binge drinking among those 9-20 years old by being “The Wall.” The average onset age for underage drinking is 12 years old; but can begin as early as 9 years.  Both youth and adults can help LHD achieve this goal by getting actively involved in the campaign.

The PSA contest was a part of the Alcohol Awareness Month activities which is held annually in April to increase public awareness and highlight the public health issue of underage drinking and its consequences to individuals, families and the community.

“The students of Douglas County exemplify what is needed to prevent alcohol and drug use and promote healthy behaviors among our youth,” said Albert Case, Director of Adolescent Health and Youth Development (AHYD) for Cobb & Douglas Public Health. “All of the entries were excellently produced and very creative.  The Live Healthy Douglas Coalition and Douglas Alcohol Prevention are proud of the hard work these students put forth.”

First and second place awards were given to both high school and middle school groups.

Title of PSA: “The Wall”

Title of PSA: “Too Many Walls”

Title of PSA: “The Party”

Over the next year, Live Healthy Douglas and its partners will ask the community to “Be the Wall” between teens and alcohol. The simply stated campaign is designed on the premise that while alcohol may be the primary substance of choice for teens across the state and country, underage drinking should be the single most preventable at risk behavior among our teenagers.

“BE THE WALL” CAMPAIGN MONTH

On May 29, 2014, The Douglas County Board of Commissioners proclaimed May as “Be the Wall” Campaign month. “Be the Wall” is a national social norm campaign that encourages citizens to block access to teens and alcohol. “Be the Wall” is a part of the Alcohol Prevention Program in Douglas County through Cobb/Douglas Public Health Department. Members of the CPAW committee, Community Prevention Alliance Workgroup came to present the proclamation. Each commissioner was given a “Be the Wall” t-shirt, hat and button to promote awareness and also signed a pledge card stating that they would be clear, firm and consistent when it comes to teens and alcohol.

Funding provided by the Department of Behavioral Health and
Developmental Disabilities, Office of Prevention Services and Programs.

Be sure to check out our new FAQ section for answers to frequently asked questions.

We are rolling out new email notifications and newsletters to help you stay more informed and up to date on the latest news and developments at CDPH. Sign up using our contact form today to stay informed!