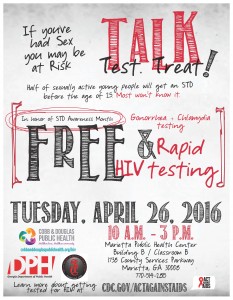 Cobb & Douglas Public Health (CDPH) is partnering with Someone Cares, Inc. of Atlanta to offer free HIV, Chlamydia and Gonorrhea testing on April 26 in observance of National STD Awareness Month.

Nearly 20 million new sexually transmitted infections occur in the United States every year costing the American healthcare system nearly $16 billion in direct medical costs alone, says a report by the U.S. Centers for Disease Control and Prevention (CDC). Having a sexually transmitted disease (STD) increases your risk of getting or sharing HIV.

According to the CDC, Georgia’s 2014 State Health Profile showed an increase in STD infection rates and the state now ranks 3rd among the 50 states for infection of primary and secondary syphilis. As in previous years, the most infections were reported among persons aged 20–24 years and 25–29 years. Georgia is currently ranked 5th among the 50 states in the number of HIV diagnoses.

“Despite Georgia’s rank going down overall, rates of STD infection have increased. Cobb and Douglas counties, as part of the Metro Atlanta Area, contribute to a significant portion of those infections,” said Rachel Franklin, Director of Epidemiology at Cobb & Douglas Public Health. “We hope to get the community talking about their sexual behaviors, and to help educate them on safer sex options by reaching out to them through testing events like these with the help of knowledgeable partners like Someone Cares.”
Most STDs don’t cause any symptoms and the only way to know for sure whether or not you have an STD like chlamydia or HIV is to get tested. Many methods of birth control are effective at preventing unintended pregnancy, but the only birth control method that protects against STD infections is condoms.
“Regular testing helps sexually active people protect their health and the health of their partner. Even asking for an STD or HIV test when visiting your primary care provider can go a long way since they don’t typically test for those infections unless you ask” said Ronnie E. Bass, executive director of Someone Cares, Inc. of Atlanta.
To learn more about STDs and the importance of getting tested, visit http://www.cdc.gov/std/sam/. For more information about the testing event, please visit www.cobbanddouglaspublichealth.com, or call (770) 514-2300.

About Cobb & Douglas Public Health:
Since 1920, Cobb & Douglas Public Health, with our partners, promotes and protects the health and safety of the residents of Cobb and Douglas counties. We work to achieve healthy people in healthy communities by: Preventing epidemics and spread of disease; Protecting against environmental hazards; Preventing injuries; Promoting and encouraging healthy behaviors; Responding to disasters and assisting in community recovery; Assuring the quality and accessibility of health care. By excelling at our core responsibilities, we will assist our residents in living healthier, longer and more rewarding lives. For more information visit www.cobbanddouglaspublichealth.org

About Someone Cares, Inc. of Atlanta:
Someone Cares Inc. of Atlanta is a nonprofit 501(c)3 community based organization with its headquarters based in Marietta, Georgia. Someone Cares (S1C) was established in Jacksonville, Florida in 1996. S1C was formed to bring about a change in the growing number of HIV/AIDS cases reported in the LGBTQ community. In 1998 Someone Cares re-established its headquarters in Marietta, Georgia (Cobb County) renamed Someone Cares, Inc. of Atlanta, serving Southeastern United States with a vision to reach, educate, and assist in the ultimate eradication of the HIV virus and health disparities around the world. They do this through advancing their mission to empower the LGBTQ, and underserved populations at risk for or living with HIV/AIDS and other health disparities; through comprehensive support services, in order to a